Ways to Open a Folding Knife

It's one thing to own a knife; it's another to know how to utilize it properly. Opening a folding knife is one of the skills that any knife owner should be familiar with. Some knives are easy to open, while others require a little more finesse. Continue reading to discover the various knife opening methods, their distinctions, and the benefits and drawbacks of each. This post will go through the most common knife opening mechanisms. 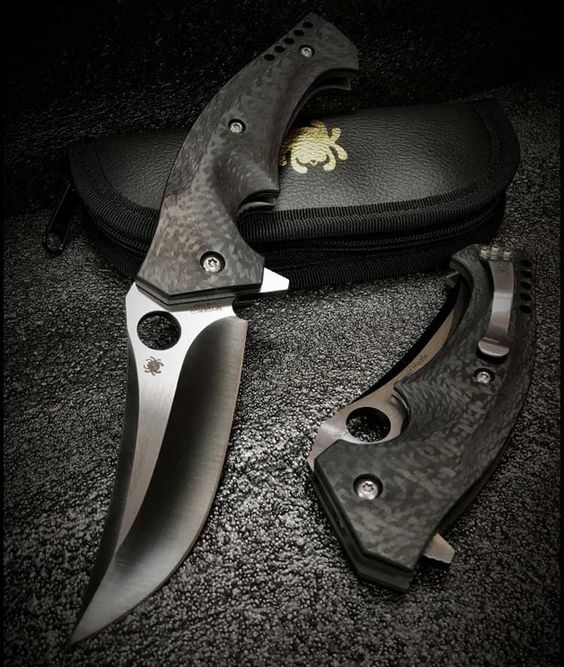 Thumbholes are one-of-a-kind and simple to use. Although there isn't much of a difference between this approach and the thumb stud, it is worth mentioning. The thumb Hole mechanism is similar to utilizing a thumb stud, but with the added benefit of being ambidextrous. A thumbhole is preferred by many knife enthusiasts because, unlike a stud, it does not protrude from the blade.

The round hole has been most closely affiliated with Spyderco folding knives since the 1980s. Several other knife manufacturers have adopted or tweaked the characteristic over the years. The knife may be opened with either the thumb or another finger, thanks to a thumb hole. Knives with thumb holes are ideal for people who carry a lot of stuff in their pockets since they are less prone to get tangled up when being pulled out. They're simple to open and look fantastic.

The nail nick is most typically observed on knives with a slip joint and that must be manually opened, for instance, the Swiss Army Knife. Your nail can dig into the machined groove, providing enough surface to open the knife. There are nail nick tools, which are miniature pry bars.

They fit into the nick and aid in the opening if you want to get fancier. Nail nicks come in a variety of shapes and sizes, ranging from small crescent grooves to longer cuts that resemble a fuller down the blade's length. When you don't mind using two hands this way is best.

There are two types: the true thumb stud, which has one lug protruding from the blade, and the dual thumb stud with two lugs projecting from the blade. The two thumb studs are a nice touch as well. Hold the knife so that your fingers aren't on the lock bar when opening the real thumb stud. Then using your thumb, apply pressure to the stud and follow the knife's opening path. Allowing your thumb to ride the stud all the way to the lock position will allow you to slowly open the knife.

The principle of a dual thumb stud is similar to that of a regular thumb stud. However, this one has two lugs extending from both sides of the blade. On the bottom lug, you can use your thumb, index, or middle finger, thanks to this mechanism. The technique is the same, but you can do it while retaining a firm grasp from underneath the knife.

This is the most straightforward quick-open technique to master. Just like in the case of a thumb stud, a flipper is found on a knife with a locking mechanism. These types of knives are ideal for one-handed deployment, which is important in a variety of situations. For instance, when you need to cut something and your other arm is pinned.

In addition, unlike the thumb stud, flipper tabs are easier to utilize while wearing gloves. Hold the knife so that your fingers aren't on the lock bar when using a flipper knife. Instead of putting them on the clip, you may put them on the clip. Apply pressure to the knife's detent with your index finger, then quickly push down and in to cause the blade to fire out. 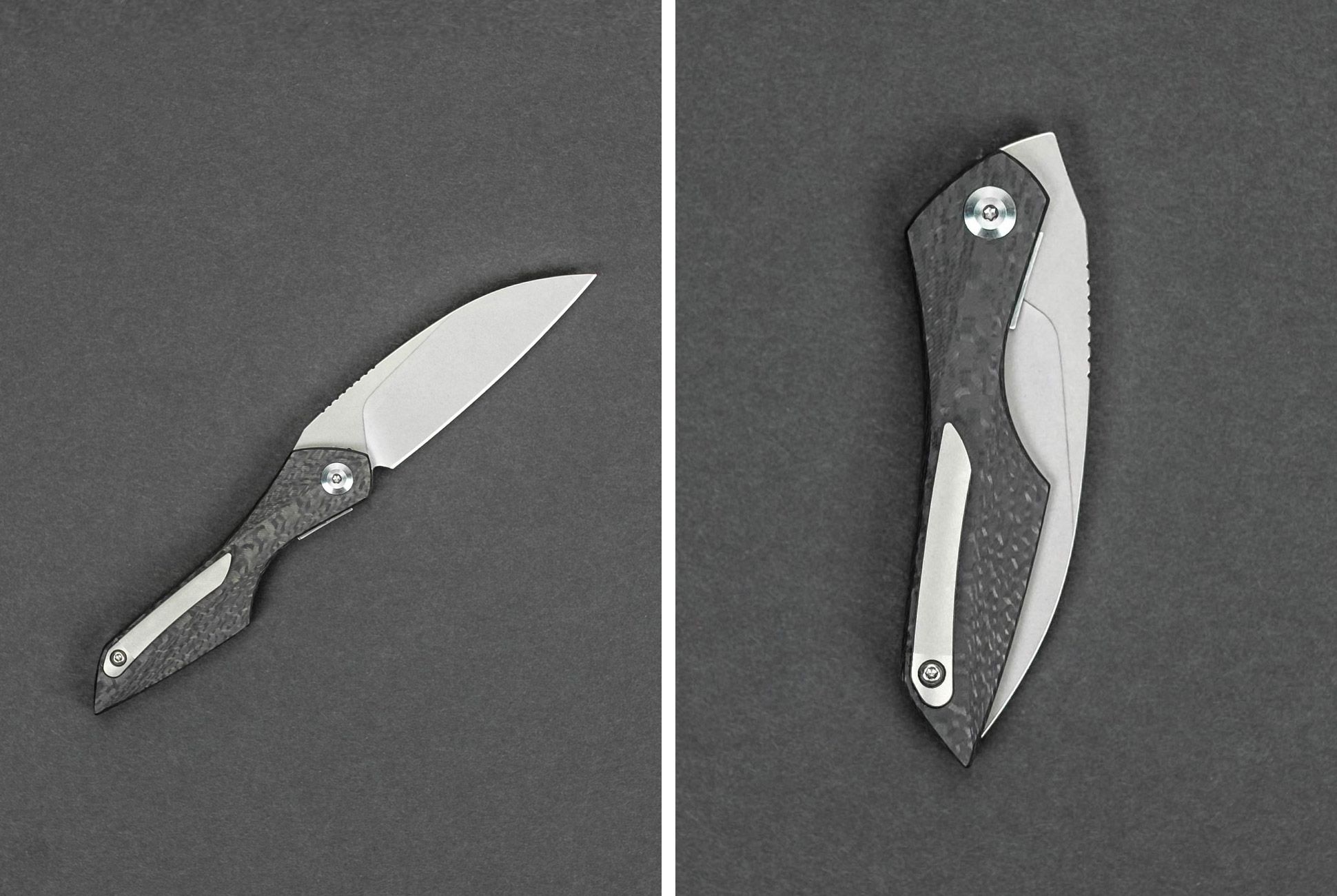 The front flipper adds a lot of fidget factors to the mix. The swooping open motion is created by rolling the thumb over the top of the knife and quickly knocking the tang in. A front flipper can be opened in one of two ways. You'll want to make sure your fingers aren't placing any pressure on the lock bar, just like with the other locking knives listed.

The first approach is choking down a little on the knife before placing your flexed thumb on the tab and swiftly rolling it over the top. The second way involves choking up on the knife a little. The blade is then fired out by arching your index finger over the top of the knife and quickly pulling the tab back towards your hand. Front flippers, like thumb studs and flippers, are great for one-handed opening. 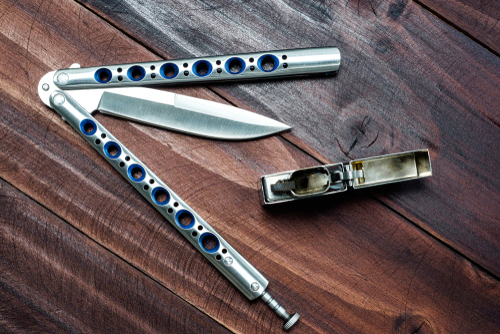 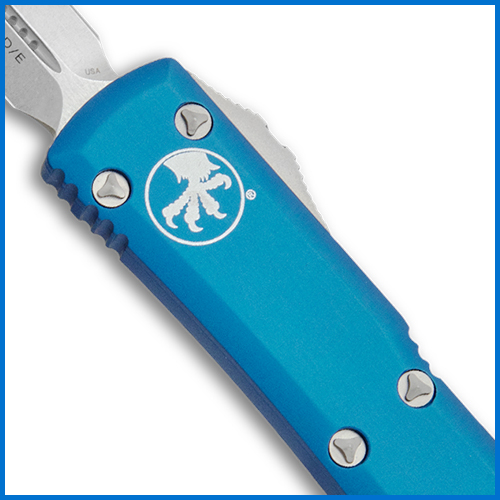 Thumb slides are commonly found on automated OTF knives. Using the thumb slide on an OTF knife is one of the most pleasant things you can do. Thumb slides are one of the simplest and fastest one-handed opening techniques. They function by slipping up or down in the direction you want the blade to move. To open the knife, you simply move it forward. Then to close the knife, you simply slide it backward. The slide on OTF knives is located on either the spine or the side of the knife handle.

Hidden releases are one-of-a-kind and make for entertaining party tricks. You may end up feeling like a secret spy if you open a knife with a hidden release. The secret release is a one-of-a-kind opening mechanism that is rarely seen. It works by sliding the bolster to the side, allowing the automated blade to be released. Simply slide the switch and push the blade to close the knife. This is a perfect opening mechanism, especially when hunting.

Button-lock knives are easy to use and open rapidly. The automatic button is essentially the same whether you carry a high-end knife or the total opposite. To activate the blade, simply press the button. A safety or lock on some automatic knives stops the blade from being activated when the button is pressed. Automatic knives are wonderful for fast opening and closing your knife with one hand, but they often require two hands to close. Because of their rapid movements and ease of use with gloved hands, they are excellent emergency response knives. 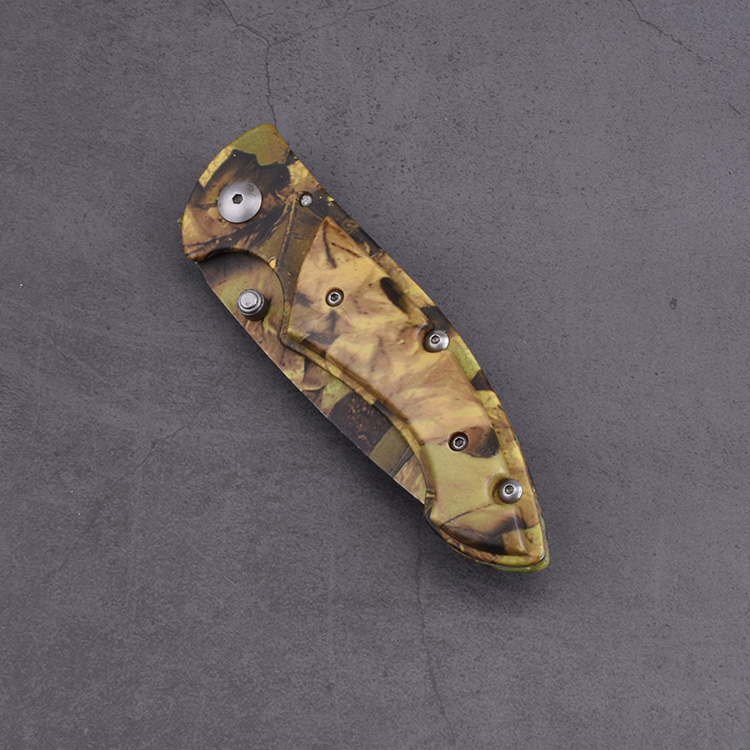 Are you seeking a folding knife that is simple to use and serves its purpose well? Here's a rundown of the top folding knives, along with a description of how to open them. 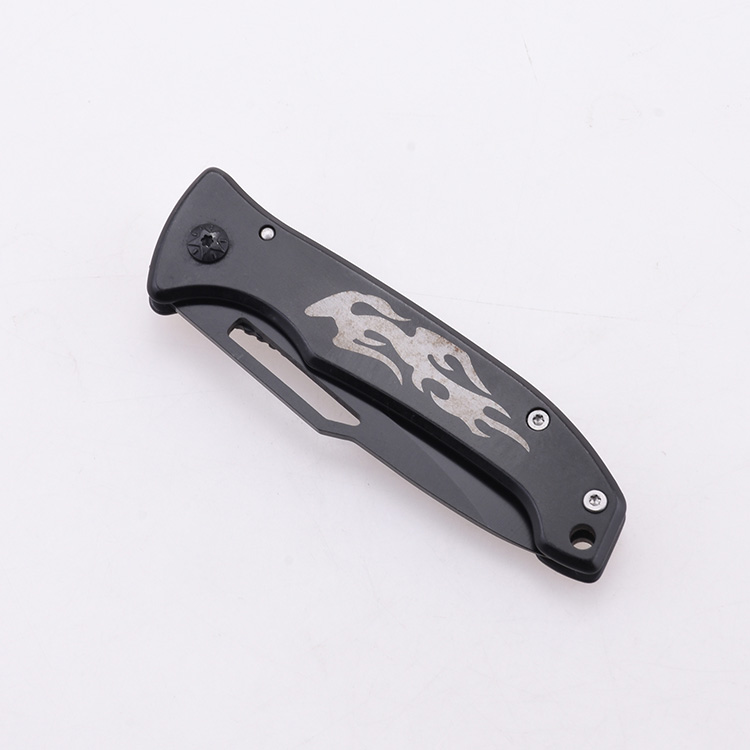 This is martensitic stainless steel with excellent machining characteristics. It is appropriate for manufacturing to endure high loads, high wear resistance, and Plastic molds under the action of corrosive media, and it has outstanding polishing performance, corrosion resistance, high strength, and wear resistance. This knife is great for camping and around the house.

It's safer than a regular knife because the cutting edge is rounded. As a result, it is highly recommended for people considering EDC activities such as family camping and youngsters. OEM Folding Pocket Knife 3Cr13 Blade is opened using the thumb Hole mechanism. The thumbhole allows the knife to be opened with either the thumb or another finger. This knife is ideal for folks who have a lot of things in their pockets since it is less likely to become tangled up when they pull it out. 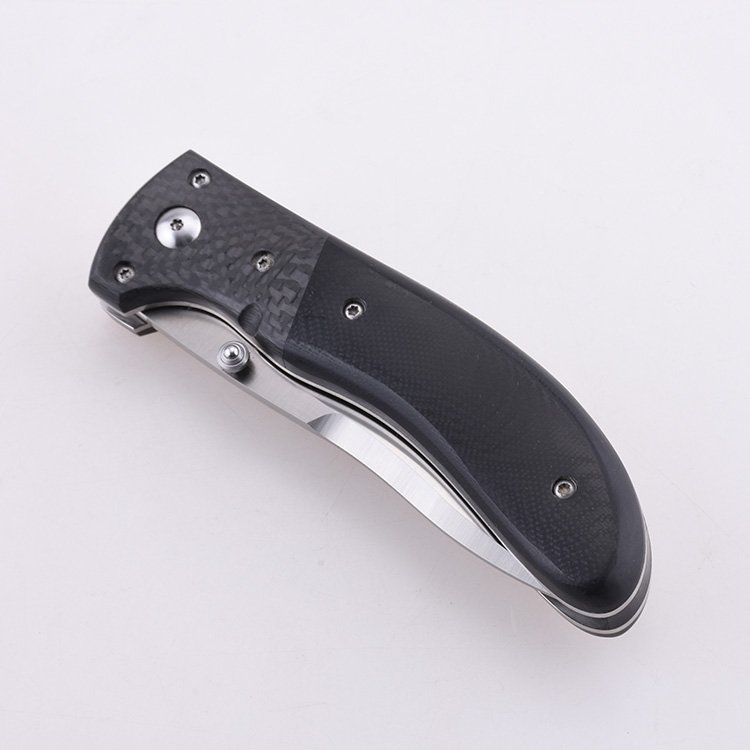 G-10, a fiberglass composite with a comparable hardness to carbon fiber at a fraction of the cost, is used in the knife. It's made of a non-porous, lightweight material. When sharpening the blade, the angle should be taken into consideration. Keep the anchor stone at around 10 to 12.5 degrees and hit the blade, as most outdoor knives have an angle of roughly 20 to 25 degrees. Place the knife on the anchor stone with the blade and anchor stone securely attached from the side as a rough notion.

This knife is opened using a thumb stud Mechanism. You will need to open the real thumb stud, then use the knife to keep your fingers off the lock bar. Continue by pressing down on the stud with your thumb and follow the knife's path of opening. You can slowly open the knife by allowing your thumb to ride the stud all the way to the lock position. 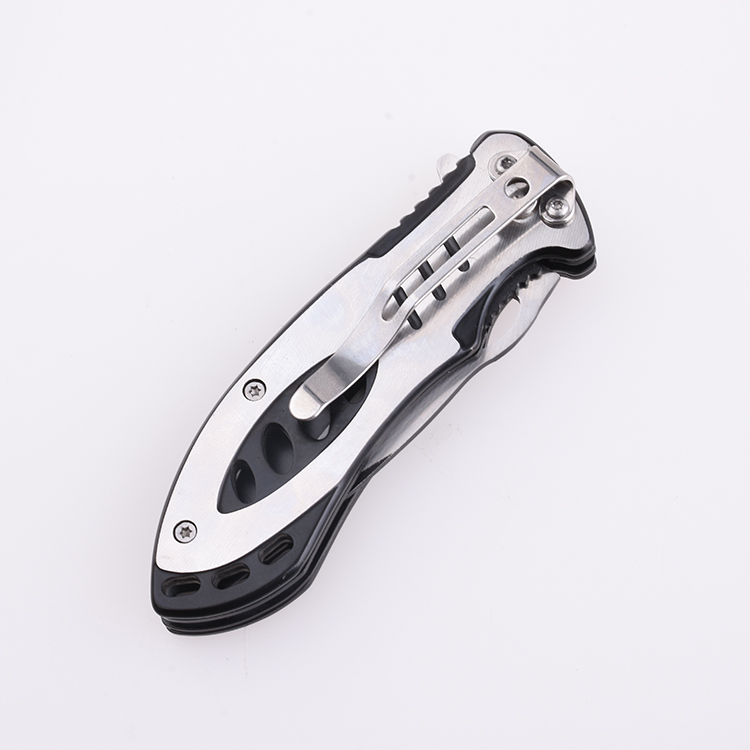 It's made of stainless steel and has good hardness, magnetization, and welding preheating. Welding electrodes made of austenitic stainless steel and Q235 do not require preheating. A drop point is the blade style of this knife. It steadily decreases as it approaches the blade's tip. The knife's breadth is neither wide nor thin, and there are a variety of average widths. Its popularity stems from the fact that it may be used with blades of any form.

By placing your finger on the back of a delicate knife, you can use the drop point for fine work or face the skin of things. Because the blade is a little thick, it won't be suited for little piercing. This particular knife is opened using the flipper tab method. Hold the knife so that your fingers aren't on the lock bar when deploying the flipper tab opening mechanism. Apply pressure to the knife's detent with your index finger, then quickly push down and in. The blade will fire out as a result of this action.

I hope you find something useful among the various opening mechanisms listed above. It's also worth noting that some folding knives combine multiple features from the list above. There are types that include both a flipper and a variation on the thumb hole, for example. The user will then have two alternatives for a one-handed opening. If you have any questions concerning knives, please contact us. 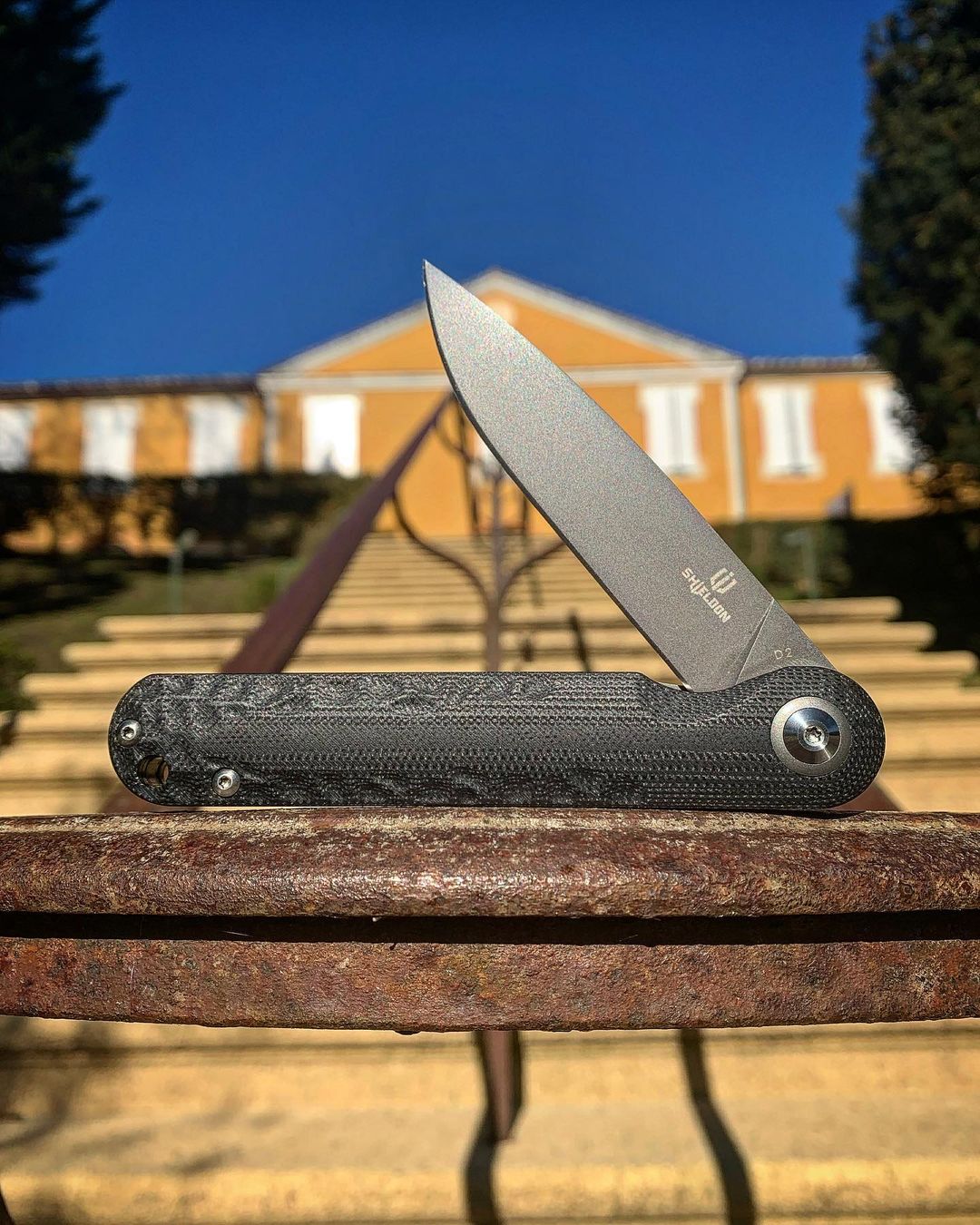